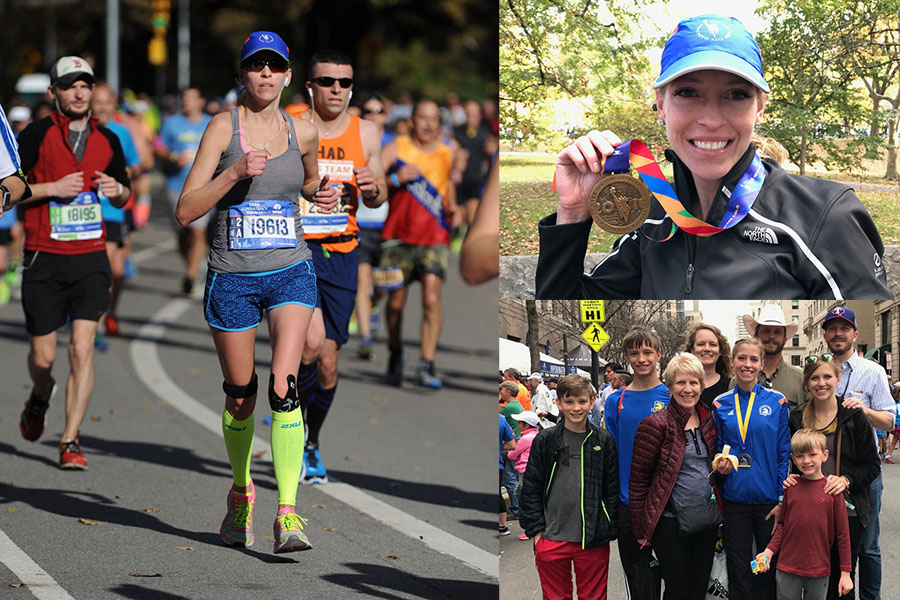 Counselor Cheryl Hukill runs the Boston Marathon and celebrates with family after the finish. (courtesy of Cheryl Hukill)

Counselor Cheryl Hukill runs the Boston Marathon and celebrates with family after the finish.

As the alarm clock goes off at 5:30 a.m., she keeps quiet, trying not to wake up her three boys while she pulls on her shin sleeves, laces up her shoes and hits the pavement training for her next marathon.

“I ran them in my early 20s and I even ran a few when I had my first kid,” Hukill said. “I recently picked it back up in the last three years.”

My goal was to finish, but when I won it and realized I was only one minute away from qualifying for the Boston Marathon.”

“I did cheerleading and band when I was in high school,” Hukill said. “I just did other things in high school. The first marathon I ever ran, I was actually still a college student, and against my coach’s wishes, I signed up for a Amarillo marathon.”

Hukill said she won the first marathon she ran. She said later she realized she almost qualified for the Boston Marathon.

“I mean it was small,” Hukill said. “My goal was to finish, but when I won it and realized I was only one minute away from qualifying for the Boston Marathon, that’s when I decided to start really training for marathons. It sounded like a challenge, and that’s really why I wanted to just try it.”

When Hukill graduated from WTAMU, she became the cross country coach at Canyon High for three years.

“I would call Coach Baca and just get advice from him,” Hukill said. “He knows more about running than anyone I know. It was great to have him kind of mentor me.  When I was coaching and teaching, I took night classes and summer classes at WT to get my masters.”

Hukill said when she started her own family, she knew she had to resign from coaching.

“I kept running while I had kids, and it was really more for fitness,” Hukill said. “I did a lot of half-marathons during that time.”

After resigning from coaching, Hukill became a counselor at Randall High School for five years before she started counseling at Canyon. Hukill said she uses running as part of her self-care practice for counseling.

“Running helps me mentally just prepare for the day,” Hukill said. “It clears my head, and as a counselor you have to practice self-care, and running is really self-care for me. I can tell if I’ve taken too many days off. I get irritable. It’s kind of a therapy for me.”

In addition to the 13 marathons Hukill has completed, she has run at least 25 half-marathons.

Hukill had already been drawn for the New York marathon, and she had qualified for the Chicago marathon.

“I thought, ‘well I can do it,’” Hukill said. “They were just a month apart. It was hard but I knew I could go through like one training cycle.” 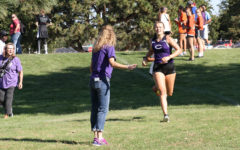 Cross country closes in on regionals

Hukill said she likes to get about half of her longer runs done before the sun ever comes up because the run goes by more quickly before the sun comes up.

“I like to listen to music while I run,” Hukill said. “Lots of times I try and get a running partner to run with me. On my long runs, it easier to talk and carry on a conversation, so it’s nice to have someone to run with.”

Hukill has run in three of the six major marathons around the world. The other three outside of the United States are in London, Tokyo and Berlin.

“I’ve run Boston three times,” Hukill said. “I’ve only run the major ones that are in the country, but I think London would be a really awesome one to run in.” 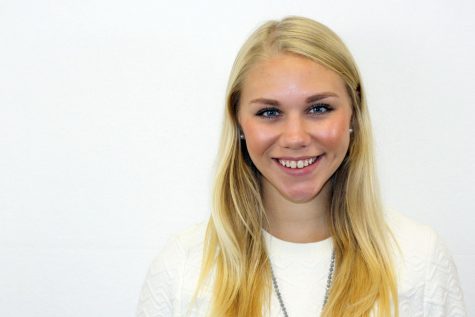 Hey, I’m Faith Douglass! I am a senior this year, and this is my second year in newspaper. I play basketball and run cross country and track. I am in Student Council, Decide to Defy, Fellowship of Christian Athletes, LEAD, National Honor Society and...