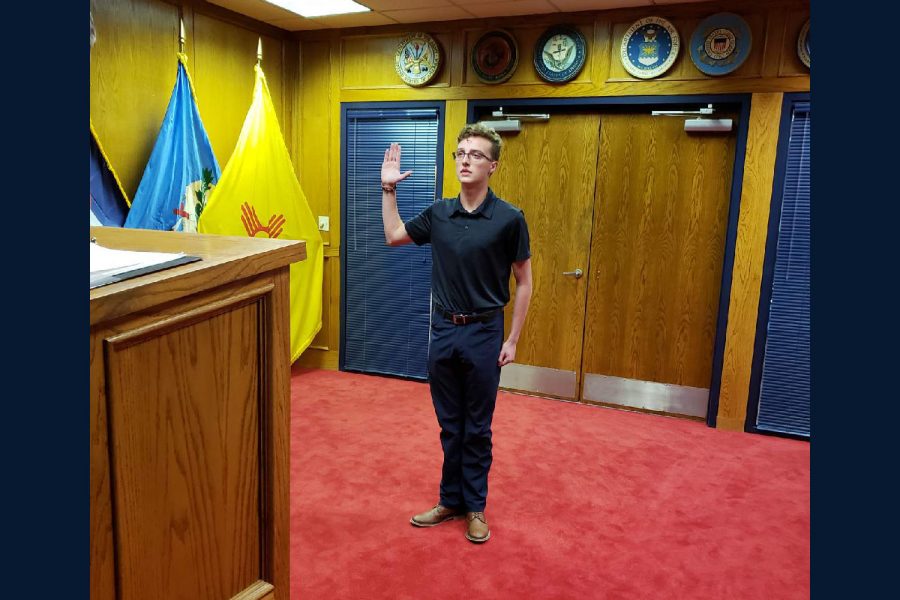 He raises his right hand. His eyes shine with pride. His family and friends begin to tear up as he repeats after the man dressed in uniform.

“I had been thinking about joining the military my entire life, but I really started considering making that a reality my freshman year,” Hughes said. “I want to serve my country. If all my ancestors died for us, why shouldn’t I put my life on the line for the rest of my country like they did?”

I feel that as a strong person with a strong will, I can do a lot for my country.”

“Though my contract is eight years, I enlisted so early that I will have three years of inactive duty once I get out instead of four,” Hughes said. “I don’t feel like I’m sacrificing anything by joining the Marine Corps because in the end, it’s all worth it. I’ll be fighting for what I love. I’m not giving anything up–I’m doing something better and something worth doing.”

Hughes will attend boot camp in either Parris Island, South Carolina or San Diego, California. Throughout his time there, Hughes said he plans to train to become a radio operator.

“I am going to train to be a communications technologist within the Marine Corps,” Hughes said. “My real hope and goal is to become a radio operator for them. I feel like it is my duty as an able-bodied citizen to do as much as I can. I feel like it’s every person’s responsibility to do something good for their country. I feel that as a strong person with a strong will, I can do a lot for my country.”

Hughes said countless hours of training were required before his enlistment process even began.

I’m yearning to go to boot camp and earn my pendant and the right to be a part of the brotherhood.”

“Before I was able to enlist in the Marines, I had to train and gain about 15 pounds in order to meet the weight requirement,” Hughes said. “I also had to go through extensive background checks and body performance tests before I could even think about enlisting. Once I did enlist, I still train twice a week with the Corps, but that’s not enough. I train at my house almost every day, too. If you go in without having prepared, it is going to be a huge shock.”

Hughes said his grandfather helped motivate him to join the Marine Corps.

“My grandpa was in the Army,” Hughes said. “He served two tours in Iraq and afterwards went back as a free agent to train Iraqi police officers. He was also in the police force when he got out of the military. He did so much over there, and I really admired him for that.”

Hughes said choosing to enlist was one of the biggest decisions of his life.

“When I swore in, I felt a sense of accomplishment,” Hughes said. “All of this had finally come together for me to become a poolee of the Marine Corps. When I enlisted, I knew I wasn’t done yet. We are the only branch that doesn’t name their soldiers right when they’re enlisted. Until I earn the eagle, globe and anchor at the end of my 13 weeks, I will not be a Marine. I’m yearning to go to boot camp and earn my pendant and the right to be a part of the brotherhood.”

I want to be a part of something greater than myself and fight for those I love.”

Hughes will train in the Marine Corps boot camp for 13 weeks before he becomes a Marine. He will graduate from boot camp in early September 2019.

“I’m scared, but I know that everything they do in boot camp is intended to break you down,” Hughes said. “In the end, it’s to make you a Marine. The soldiers at boot camp are not there to torture you, no matter how much you think they are. I’m a little scared, but overall, it couldn’t come any quicker. I’m very excited to go.”

“They tell you being a Marine is 80 percent mental and 20 percent physical,” Hughes said. “If you can’t wrap your mind around the fact that you’re doing it for your country and the people you love, you won’t be able to get through it. You also have to be selfless. There is no room for selfishness anywhere in the Marines. The whole idea of the Marines is built upon this brotherhood. If you’re self-centered, you will not make it on the battlefield.”

Hughes said he wants to join the Marines to be a part of something bigger than himself.