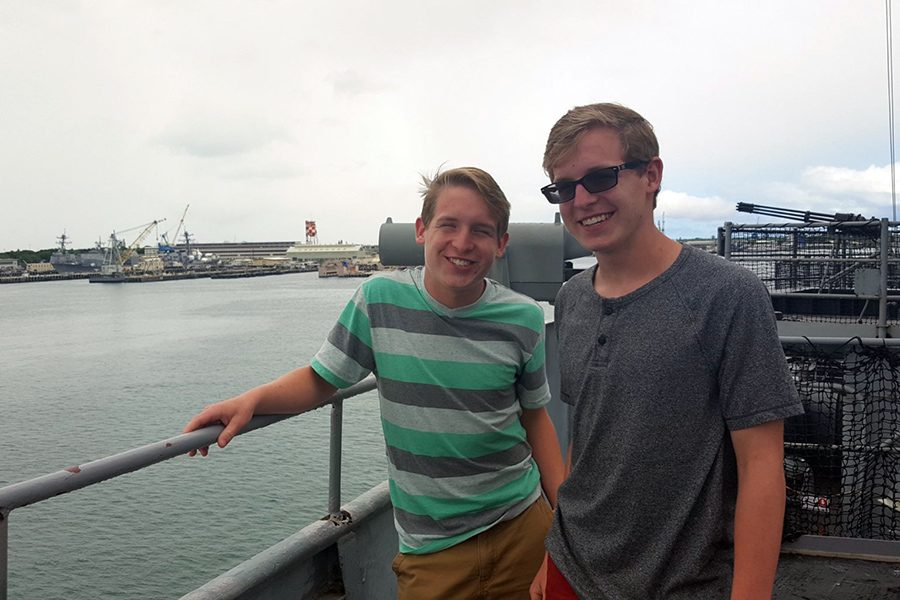 Courtesy of Tanner and Justin Mahan

They finish each other’s sentences as if reading from a script and look so similar they are often confused for each other. While this may seem like a subject fit for a modern young adult novel, this is reality for juniors Justin and Tanner Mahan. As some are celebrating anniversaries of Cupid’s arrow this February, the anniversary of the Mahans’ bond goes back to the day they were born fraternal twins.

“Growing up with a twin was different,” Justin said. “Most people really didn’t know who I was at first, but once they got to know us, it was pretty easy to tell us apart. It was probably just the same as growing up with any brother or sister. We got into fights, but we were always there for each other.”

While their relationship may be similar to any sibling bond, they said they are definitely closer since they are twins.

It was probably just the same as growing up with any brother or sister. We got into fights, but we were always there for each other.”

“I would say our bond would definitely be stronger because we’ve been set together from such a young age,” Tanner said. “Just because we’re twins makes it better, on top of being brothers.”

While some may think being twins could have caused problems growing up, both Justin and Tanner said it actually had the opposite effect.

“Being twins could be frustrating because he’d get on my nerves all the time,” Tanner said. “But once you think about it, it was a blessing because I always had someone with me.”

Justin said being together so much strengthened their relationship, but also caused some confusion among those who were not always with them.

“Most people didn’t really understand I was a twin at first,” Justin said. “They’d ask why I changed my clothes sometimes.”

Even though Justin and Tanner look physically similar, their personalities could not be more different from one another.

We’ve learned how to be there for each other and how to make bad situations seem better.”

“He usually likes opposite of what I do,” Tanner said. “For instance, he likes cool colors, and I like warm colors. He just thinks differently than I do. So in a way we’re mostly similar, but then there are specific traits we have that are opposite.”

While Justin may think differently than Tanner, there are moments when their thoughts are completely in sync. “Twin telepathy” is not a myth, according to the Mahans.

“Sometimes we’ll be sitting at dinner, and I’ll get a song stuck in my head. Then Tanner will start singing it,” Justin said. “Or sometimes, he’ll get something stuck in his head, and it will get stuck in mine. A lot of times when we’re talking to somebody, we can even say the same things at the same time. It’s really cool, but weird.”

With their similar looks, opposite personalities and “twin telepathy,” the Mahans are siblings who said they love their twin and are glad to be brothers.