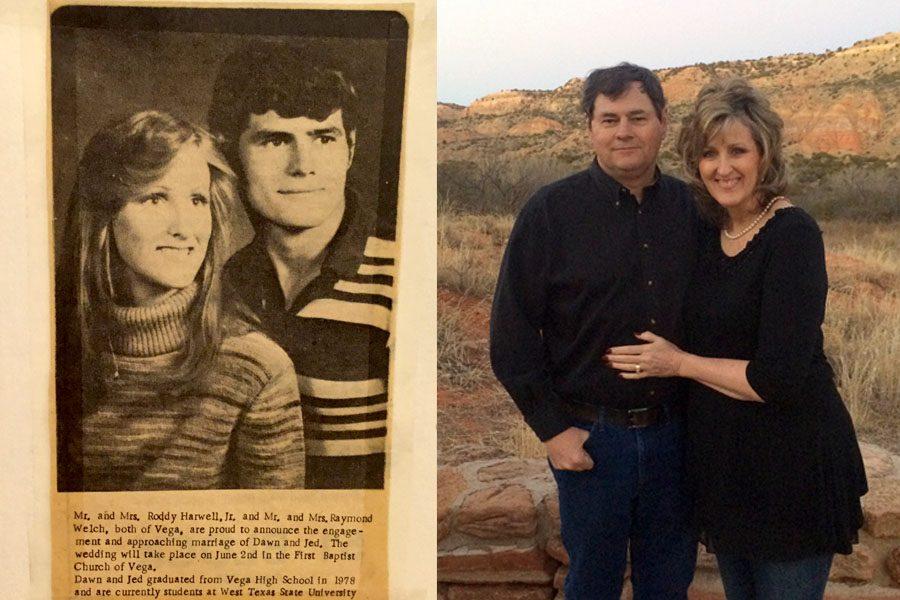 Dawn and Jed Welch became engaged in 1979 and have been married 38 years.

A date with destiny

The girl’s hand glides over the cover of the yearbook cradled in her arms as a smile stretches across her face. The boy in the big, black cowboy hat caps his marker and watches intently, proud of his artwork within her book. Her fingers pull open the cover, and her eyes search the autographed page. “Dawn + Jed,” with a heart surrounding the names and the date “June 2nd” adorns the page in the boy’s handwriting. The boy and girl look at each other and burst out in a fit of laughter at their inside joke of getting married. Little did they know the illustration would become their reality at the of age 19.

Dawn and Jed Welch attended different elementary schools, and they met in the fourth grade at a piano recital, where they were both performing.

“I played my piece, and when I finished I was walking down the stairs in front of everybody,” Welch said. “The boy after me was called and he went barreling up the stairs, knocked me down, and I fell backwards with my dress over my head. I was so embarrassed. That’s my husband. That was the first time we ever met.”

Jed transferred into Vega Junior High and was reunited with Welch, who said their friendship flourished from recalling the memory of the piano recital incident together.

I saw Jed in the seventh grade, big black cowboy hat, and I knew it was love at first sight. It really was.”

“I saw Jed in the seventh grade, big black cowboy hat, and I knew it was love at first sight. It really was,” Welch said. “That summer it was June the second and he said, ‘Hey, let’s go get married’ and I said, ‘Okay.’ We were just goofing around.”

Every June the second after that summer, Welch and Jed would see each other, and Jed never failed to wish her a ‘Happy Anniversary.’

“It just became a big joke,” Welch said. “He even had different girlfriends, and he didn’t care. He would still yell, ‘Happy Anniversary’ to me.”

The couple started dating their junior year of high school and continued to date until they turned 19, when they decided to take their relationship to the next level. On Christmas day, Welch said she knew what she was receiving from Jed, because he made her pick out a pair of diamond earrings prior to the day.

“I picked out small stud earrings,” Welch said. “I knew what was under the tree, but when I opened it up, it was my wedding band. Then he said, ‘How does June the second sound?’ So at 19 we married, and that was 38 years ago. I married my best friend. It kind of sounds silly, but it’s our story. I think when people find that bond it doesn’t matter if you are 70 or 19. If you truly love that person, the love is the same.”

Welch said being married at such a young age was difficult, but her father being diagnosed with cancer when she was in high school helped her relationship with Jed.

“My dad and Jed had a really special relationship,” Welch said. “We married at 19 and for two years my dad got to be a dad to Jed. Then we lost my dad; he was 47. I am thankful for that time. At the very beginning of our marriage, we had that bond and it really helped us to grow together. We had a lot of things to go through, and I think that is part of the reason we learned to lean on each other so much.”

I think when people find that bond it doesn’t matter if you are 70 or 19. If you truly love that person, the love is the same.”

The two have been together for 38 years, have three daughters and continue to maintain a healthy relationship, with the help of Welch’s mother giving them advice at the beginning of their marriage.

Welch said her experience being married and teaching finance for several years has led her to believe the most difficult part of marriage is figuring the finances between spouses.

“He doesn’t have his account; I don’t have my account. Together we are one person,” Welch said. “When it came time for making decisions with the children, we did them together. The hardest part is over money. I think you’ll find that true, statistically, when you look at the divorce rate. We just decided it wasn’t going to be a problem with us. All of the money decisions, we made together.”

“I think they think they have met the love of their life without experiencing life yet,” Welch said. “I would encourage everyone to just take their time. Don’t get in such a rush to grow up. It happens quickly enough, and you can’t ever get that time back. Make smart decisions for your future. Have fun while you can. That’s what we did–we had fun all of the time. We weren’t really serious until we were 19, and it was right. Don’t be so quick to grow up.”