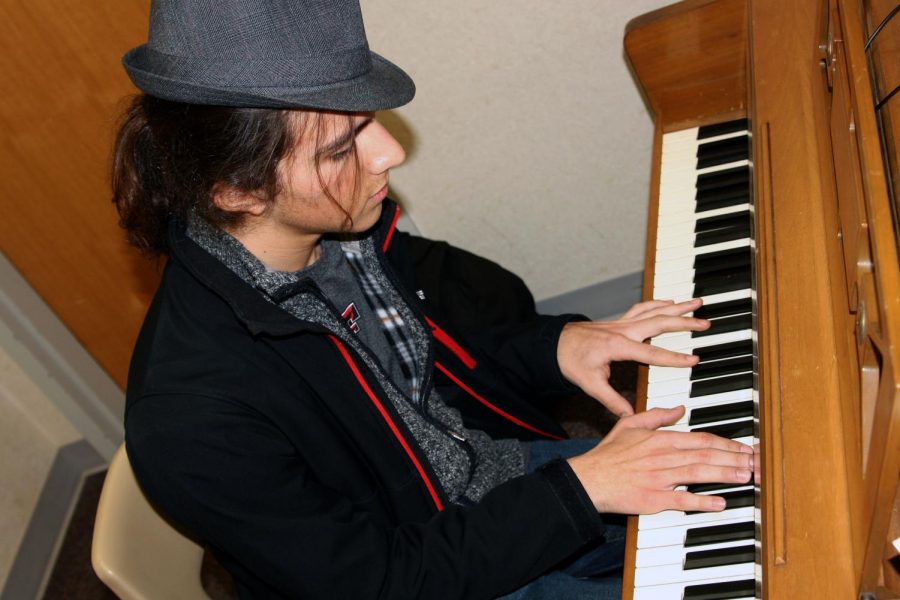 Hands glide across piano keys and trumpet valves fill the room with sweet, soulful melodies. The smooth rhythms of jazz fill the band hall, turning it into a lively jazz club. Students are fully immersed in their music, putting air into their horns and pulling heart out of them.

“Jazz is a lot of making up stuff,” Ramirez said. “I have fun playing in different styles like blues and jazz of course. It’s one of the most creative forms of performing music. There are no set rules or exact notes you have to play, especially not in piano or as a soloist. You can make it up, or improvise. It’s cool.”

Ramirez performed with the UIL all-region jazz band in March.

“I had to play three piano etudes in different styles for my audition for all-region jazz,” Ramirez said. “I found out I got first, and they welcomed me. There were six saxophones and every one of them could solo like a boss. It was insane. Everyone there could play really really well, and it came together very quickly. It was how I would imagine a real jazz setup to be like when they perform in a professional setting.”

Canyon High’s jazz band performed at the band’s annual Christmas concert and competed at the UIL Solo and Ensemble contest in January.

“One thing I find cool is that we only rehearse one day a week, and we are able to play some pretty cool music,” jazz band sponsor and director Luis Hernandez said. “Some of it is fairly easy, but I’m also looking at a piece right now which will challenge them a lot. At the UIL contest, the jazz band received a first division so we were pretty happy about that, even though we were missing three or four people to the flu, including our trap set player. It was pretty interesting, but we did it, which is impressive.”

Hernandez said jazz band is used as a vehicle to introduce students to different styles of playing and rehearsing.

“We want to get them to play completely different styles of music than what they run into in concert band or marching band for that matter,” Hernandez said. “With jazz band, there is a lot more variety in the styles of music. You have blues, you have rock, you have Latin rock; there are so many different things which require different types of playing. The main thing required of a jazz musician is flexibility. They have to be able to play different styles from one piece to another.”

Junior Wade House said he joined jazz band to apply himself on trumpet, which is not his primary instrument.

“I play French horn during concert season and during the marching season, French horn players play mellophone,” House said. “The mellophone has the same fingerings as trumpet and so if you can play mellophone, you can play trumpet and vice versa. But I actually taught myself how to play trumpet the summer before high school. I liked it a lot, and I wanted to play more of it. I wanted to apply myself, and that’s why I did it. I really enjoyed it and wanted to do something different.”

“There are no rules in art,” House said. “That’s what art is. It’s your creation and your heart. Jazz is going past the margin of what traditional music is considered. In jazz you have a lot more freedom and more creativity in that. That’s what makes it different. You don’t know what to expect. You can listen to countless different versions of the same song and people will do different things and it will sound different.”

The jazz band will perform at the band’s final concert May 16.

“Jazz band is for people who want something a little bit different,” House said. “Concert band is not enough for them and they want something beyond just notes on a page. Jazz is more about feeling. There are more solos, improvisation, and stuff like that. In jazz there is a lot more that you feel, rather than just play. There’s a lot of that in concert band too, but that’s what jazz band was founded upon.”