'drivers license' climbs to top of the charts 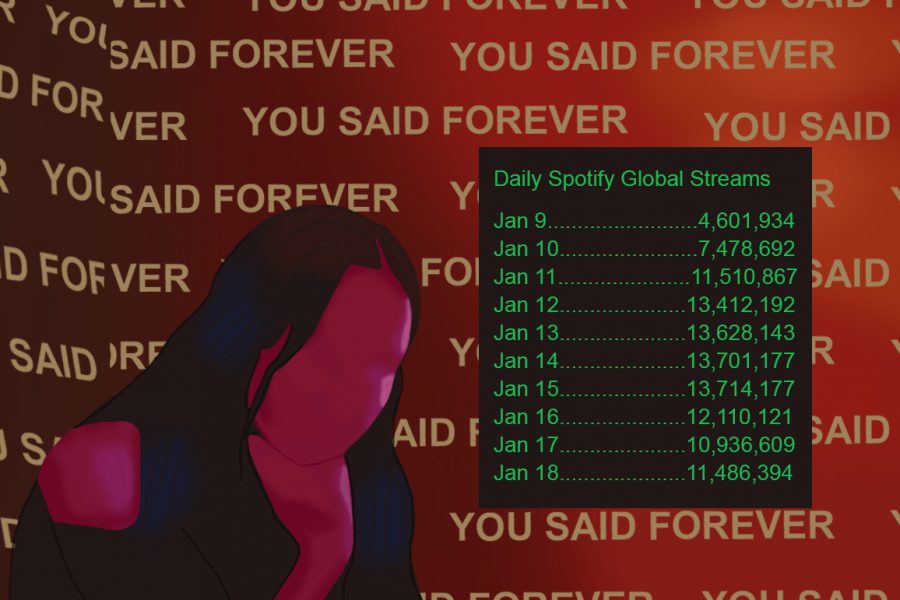 'drivers license' was released on Friday, Jan. 8, quickly gaining traction as it climbed to the top of the charts of many popular streaming platforms. The song soon became the most streamed non-holiday song on Spotify in one day, with 15.2 million global streams on Jan. 11, according to CNN. It then broke its own record with over 17 million streams on Tuesday, Jan. 12.

In July of 2020, Rodrigo posted a video of her playing the piano and singing the unreleased song, on her Instagram. With thousands of positive comments coming in, in a video, Rodrigo said she then turned to her music producers and began recording a studio version of the song.

The song tells of the lingering emotions of Rodrigo’s breakup as she reaches big milestones without the person she planned to experience them with. Although the details of “drivers license” are specific to Rodrigo’s life, she was able to capture the raw emotions of heartbreak, allowing listeners to relate to her vulnerability.

“drivers license” officially passed Ariana Grande’s “thank u, next” for the largest single day of streams for a female artist in the U.S., according to Spotify. In 2018, “thank u, next” reached 4.2 million streams on Monday, Nov. 5 and held the record of top streams for over two years. In contrast, “drivers license” reached 5.7 million streams in the country on Monday, Jan. 11 this year.

This is not the first time that Rodrigo has had a trending song about a breakup. While staring in “High School Musical: the Musical: the Series,” a Disney+ original series, Rodrigo performed “All I Want” as her character, Nini, experiencing her first heartbreak. “drivers license” is Rodrigo’s first single to be released through her producing agency, Geffen Records.

Regardless if someone has been through a breakup, the combination of Rodrigo’s poetic and musical talents allow listeners to relate to the emotions portrayed through the song. The song begins with an audio clip of a car starting that transitions into piano chords. Throughout the song, Rodrigo tells the story of receiving her driver’s license and going on drives thinking of her lost relationship.

The mind-blowing accomplishments of Rodrigo’s song sets her up for success as she begins her music career.