The Eagle's Tale • May 8, 2020 • https://eaglestaleonline.com/arts-entertainment/2020/05/stardew-valley-awaits-new-update-has-endless-possibilities/ 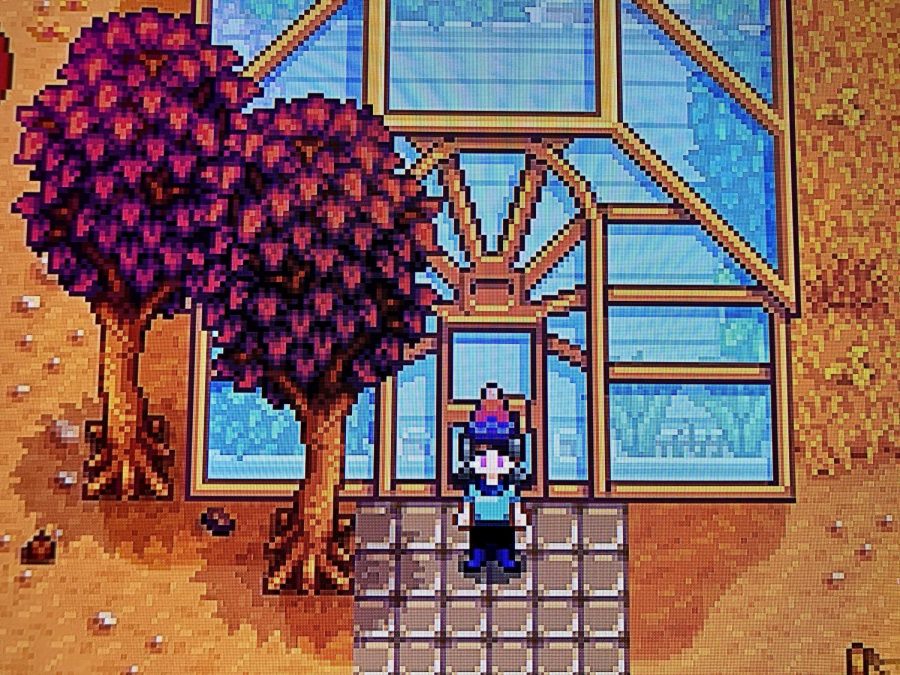 The greenhouse is one of the rewards the player will receive for working to fix the community center.

“Stardew Valley” is an open-ended farming game created and developed by Eric Barone. It was released on February 26, 2016 for Microsoft Windows, but has since been made available to macOS, Linux, PlayStation 4, PlayStation Vita, Xbox One, Nintendo Switch, iOS and Android.

Since its release, “Stardew Valley” has had several updates that have improved and expanded on the original game. On April 7, Barone conducted a twitter poll pitting tropical fruit trees against each other; the banana tree won. Barone then announced not only is the banana tree coming to “Stardew Valley,” but a whole new update will be as well. The question is now, what more could possibly be done with such a brilliant game?

In “Stardew Valley,” the player works as a farmer who takes over their grandfather’s old and overgrown farm to escape the bustle of city life. As the game continues, the player can grow crops, raise livestock, gather ore, fight monsters and socialize with the townsfolk. The farmer is also asked to restore the community center, a dilapidated building that used to be the heart of the town.

Once the community center is completed, the player may find themselves at a loss for what to do next. However, in the 1.4 update, Trash Bear was added. At the beginning of year three, Trash Bear appears and, if the farmer gives it a couple of items, it will clean up the town. This is a perfect way to keep players engaged after the community center, which can easily be restored in two years’ time.

A 1.5 update including more endgame quests would benefit the game greatly. Players could also be allowed to work towards new and expensive items, such as a tractor, birdhouse, another backpack upgrade or fancy furniture. A new improvable skill, such as magic or cooking, would also be an easy addition that could add hours of gameplay. There are a handful of festivals in the game that take place every year and while fun, some events that only appear every three years or so, like a circus or horse races, would give players something to look forward to.

Another feature that could be utilized for endgame purposes in further updates is the community upgrade, which was introduced in the 1.3 update. Once a farmer is successful enough to have upgraded their house several times and amassed another half million gold, the community upgrade becomes available. This allows Robin, the local carpenter, to build another NPC (non-playable character), Pam, a new house in place of her trailer.

This is a brilliant expansion of the game, as it, again, lets the player use their assets to improve the town beyond the community center. The spa is a perfect opportunity for another kind of community upgrade, whether it is built through bundles like the community center or purchased from Robin. The spa, while useful, is by no means a destination spot, though, with the help of a prosperous farmer, it could be. Places like the Saloon or Marnie’s Ranch could also be improved to offer new recipes, animals (donkeys and turtles, please!) and so on.

Similarly, between the Cindersap Forest and random patches of forest there is a lot of unused space in “Stardew Valley.” With a new update, these spaces could be used to build new attractions for the town, like the movie theater in the 1.4 update. The movie theater is difficult to get and requires some of the most rare items in the game, but it also allows players to have something new to be invested in. Once built, the theater adds a whole new area of play, complete with minigames and snacks.

So, a school for the town children, Vincent and Jas, a campsite, a hotel, amusement park or otherwise would all be entertaining additions to the town. The spaces could also benefit the farmer and become a place for farm expansion, or better yet, a place for the farmer to make their very own shop. After all, the shipping bin feels a little year one.

These spaces could also be used to move in new NPCs. The current NPCs are wonderful and continue to improve as more personalized heart events are added, it would be nice to have a change. Gamers who have played “Stardew Valley” since its release could very well have married every eligible bachelor or bachelorette at this point. It would be fun to have a few new options.

Likewise, there are several non-giftable NPCs in the game who show up to festivals and run shops, but cannot have a relationship with the farmer. This is one of the few limiting and frustrating aspects to “Stardew Valley.” It does not make sense that one can build a movie theater entirely by oneself, but cannot interact with Gunther outside of donating things to his museum. In the next update, these NPCs should be given normal schedules and heart events to add more depth to the relationships “Stardew Valley” puts so much emphasis on.

And, as far as currently useless goes, children may be the only attribute in the game needing real improvement as their only function is running around the farmer’s home aimlessly. With any luck, they can be allowed to grow up, go to the aforementioned school or help on the farm in later updates. Or, best of all, move away.

With all of its previous updates, “Stardew Valley” has been enriched and the current world has become more complex. For example, fish ponds, now that they have been introduced, seem like they should have been there all along. Now, however, the game needs something new. While it would be a difficult task, what “Stardew Valley” needs now is an expansion, a new location entirely. Whether it is the infamous Zuzu City, a rival farming town, or a fantastical world across the Gem Sea, players need a new place to bring the home-town feel of the valley to. This would allow for new items, festivals, characters and quests to work towards and enjoy. The possibilities are truly endless.

Whatever the 1.5 update holds, it is sure to be a success. However, even if “Stardew Valley” did not get another update, the game is fantastic. Between the endearing townsfolk, mysterious adventures, awesome music and the calm that comes with living on a farm, “Stardew Valley” is both entertaining and heart-warming.