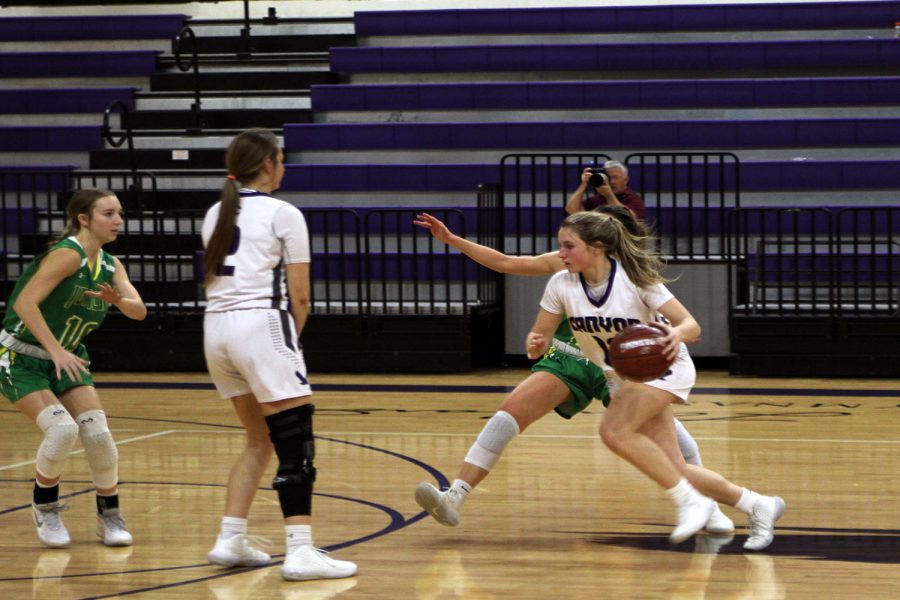 In the game versus Idalou junior Kyla Cobb pushes up the court.

Both varsity basketball teams continue their seasons this weekend with the girls playing at Dumas Friday, Dec. 13 at 7:30 p.m. and the boys playing at the Abilene Wylie tournament beginning Thursday.

The boys team is coming off a 51-44 win over Trinity Christian as they go into the tournament. The girls team faces the demons after a 55-33 win over Panhandle on Tuesday. Sophomore Taylor Thomas said this season is an exciting one.

“I think our goal is really to get better this year,” Thomas said. “Our team is pretty much going to be the same next year. We’re only losing one senior, so we want to get the same chemistry and maybe get two state championships in a row.”

The team has had victories against Molina, Nazareth and Idalou recently.

“Coach Lombard called that game [Idalou] our best game,” Thomas said. “We lost to that team last year, and I think it shows how much we’ve improved because we beat them by about 30. Our focus was really good that whole day and we were determined to win.”

Sophomore Zoey McBroom said one of the team’s strengths is their quickness.

“We can push the ball up and down the court very easily,” McBroom said. “Our defense is really good too. We’re not really tall so we have to block out rebound a lot more than most teams have to. We get in trouble with that but we’re working on it.”

Junior Brock Corman said one of the goals he made this year is to score between 10-15 points a game.

“My defensive goal is not letting the guy I’m guarding score over five points,” Corman said. “That’s helped a lot.”

Boys basketball comes into the tournament after a win against Trinity Christian.

“I think we have kids that can score a lot,” junior Brock Corman said. “We can go on offense and usually score every possession. Now we’re really working on defense and hopefully we can get that better. Then we’ll have a really solid team.”

The team finished last year’s season with a 19-12 record.

“The last couple of years we haven’t really got to talk about regional and state tournaments,” Corman said. “This year we’ve been talking about it. This year we feel like we have a team that can go really far in the playoffs if we keep playing like we are now. We’ll have to get everything in defense better, but I feel like we have a really good chance to go pretty far.”