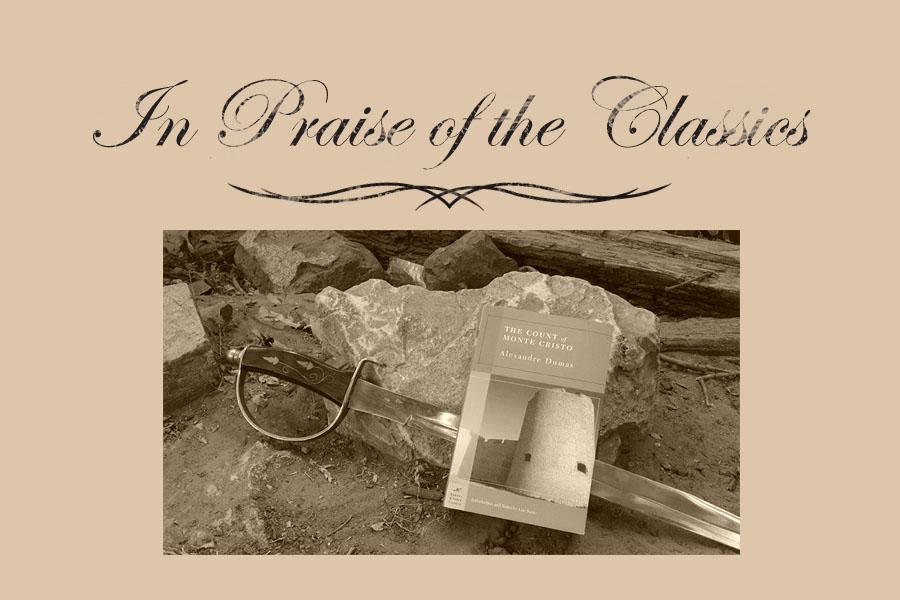 A scrawny, unkempt man drags himself up a beach, covered in sand. He rolls onto his back, ecstatic to be merely alive, to say nothing of being free. A short year later, the same man stands in the center of a large cave filled with glorious treasure, and a grim smile splits his face as he reflects on the now inevitable destruction of his enemies. In that cave, in that moment, The Count of Monte Cristo is born.

“The Count of Monte Cristo” is Alexandre Dumas‘s masterpiece, which first appeared in serialized form in France as “Le Comte de Monte Cristo” in 1844. The novel follows the life of Edmond Dantes through his unjust imprisonment, escape, and his pursuit of revenge.

To say that ‘The Count of Monte Cristo’ is an intriguing read is an understatement.”

“Monte Cristo” begins by introducing the main character, Edmond Dantes, and within the first paragraph of the novel, the primary criticism of “Monte Cristo” surfaces. The entire first chapter of the novel is devoted to establishing that Dantes is about to be married and is happy. This pattern of taking nearly a paragraph to contemplate on a subject that may take a sentence to describe surfaces throughout “Monte Cristo,” and it can become exceptionally wearisome during slower plot points.

Following this tedious introduction, the plot begins to move with the speed of a runaway train when Dantes is sentenced to life in the dreaded Château d’If out of the schemes of his very few enemies. Here, Edmond Dantes makes the transformation from a likable, happy innocent to a man with one purpose in life: to reward those who were kind to him before prison, and to destroy those who put him there.

This transformation is one of the strongest points in the novel, as Dumas takes a simple character and pushes him to the brink of suicide by leaving the poor protagonist in a prison for six years before Dantes realizes why he was incarcerated in the first place. The pages describing these six years are likely some of the darkest in literature, and are one of the places where Dumas’s loquacity is appreciated, as his descriptions reveal the torment that Dantes is going through beautifully.

This torment is counteracted by Abbe Faria, a fellow prisoner who takes Dantes under his wing, gives Dantes a classical education, reveals to his “son” the location of a vast treasure, and perhaps most importantly, solves the mystery of Dantes’s imprisonment. After this revelation for Dantes’s character, for the first time Dumas leaves anything to the reader’s imagination: the full extent of Dantes’s new vengeance, which is discussed in three sentences: “[Faria said] ‘I regret having helped you in your investigation and said what I did to you.’ ‘Why is that?’ Dantes asked. ‘Because I have insinuated a feeling into your heart that was not previously there: the desire for revenge.’”

To say that it is one of the most exciting novels ever written is slightly more accurate.”

After leaving d’If, in one of the most iconic escapes in literature, Dantes begins to make steps to recover Abbe Faria’s treasure from the uninhabited island of Monte Cristo. When he succeeds, any shadow of the man that Edmond Dantes once was dies, and The Count of Monte Cristo is born.

By the end of the first third of the novel, Edmond Dantes has been arrested, wrongfully convicted, and given a classical education by a priest. He has also been thrown off a cliff, joined with a band of smugglers, and uncovered a vast treasure on an island primarily inhabited by goats. Later actions of our protagonist include rescuing people from bloodthirsty bandits, faking the deaths of multiple characters, initiating the deaths of multiple characters, and far, far more, all in the most interesting ways possible. To say that “The Count of Monte Cristo” is an intriguing read is an understatement. To say that it is one of the most exciting novels ever written is slightly more accurate.

Yet the plot points of “Monte Cristo” would not stand out at all without the incredible characters who participate in them including Albert Mondego, a young man unknowingly living in the shadow of his father’s sins; Villefort, a good man driven to evil through ambition, and Monte Cristo himself, a spirit of vengeance who does not know if he is an angel or demon. These characters and more comprise a colorful cast of cutthroats, romantics, plotters and hellions that when paired with an already phenomenal plot, allow what at first appears to be a simple revenge story to delve deep into themes of love, honor, life, ambition, truth, religion, madness, death, hate and of course, justice.

All of the elements above combine to make “The Count of Monte Cristo” one of the greatest novels ever bound, and a must read for any literature enthusiast, history buff or anybody who enjoys reading.

One Response to “In Praise of the Classics: The Count of Monte Cristo”